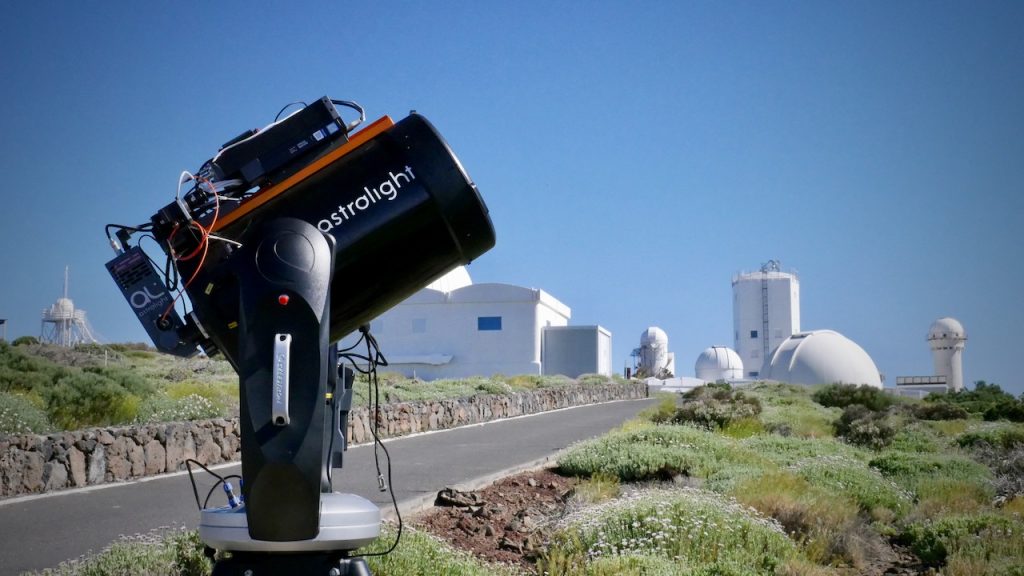 The experiment highlighted the unique portability and ease-of-use of Astrolight&#39;s solution. The
complete system, including the telescope, receive optical head, tracking computer, detector and
modem, was disassembled at Astrolight’s facility in Vilnius, Lithuania, and placed into four pieces
of luggage each under 32 kg, which were then transported 480 km by a compact SUV, placed on a
plane via regular check-in desk, flown to Tenerife and then transported up the mountain by car.
Astrolight’s OGS-1 was then reassembled and ready for operation in two hours, which is also the
time it took to prepare the ground station for the trip.

With OGS-1 operating from a car battery, a light signal transmitted from the Flying Laptop satellite,
equipped with the OSIRIS optical communication terminal, was successfully coupled into the
detector despite the uncharacteristically strong wind conditions at Teide Observatory at the time.
Besides LEO-to-ground downlink experiments, special calibration procedures for satellite tracking
with the portable mount were tested and various large pieces of space debris and satellites were
tracked.

The repeated tracking experiments showcased the OGS-1 tracking software’s ability to compensate
for imperfect mounting and actuation of the telescope using commercial-off-the-shelf (COTS)
equipment. The week-long test campaign concluded with successful disassembly of the ground
station and a journey back to Vilnius, where OGS-1 was also operational immediately after the trip.

“We were able to couple the signal from the satellite laser transmitter into a 105 μm fibre while the
satellite was travelling at 7.8 km/s, about 2000 km away from us at 5 degrees of elevation above the
horizon,” says Laurynas Mačiulis, Astrolight co-founder and CEO.

ESA is presently upgrading the Agency’s optical ground station at Tenerife, which until now could
only be used for laser ranging, with an optical communication package.

“For this optical communication test, we are tracking and receiving a laser light signal from LEO at
ESA’s IZN-1 station using the portable ground station from Astrolight as well as with our existing
laser terminal,” says Clemens Heese, Head of the Optical Technologies Section at the European
Space Agency

“By performing this test with two terminals simultaneously, we can see and study differences in the
links, which is very useful for joint assessment and for optimising the respective systems – there
was a lot of engineering discussion which was very fruitful for both ESA and Astrolight.

“This test was important because a portable optical ground station that you can pack in a suitcase
and move to a place where you need to send or receive data offers a lot of possibilities for
connecting remote locations – like disaster areas – that don’t have data communications.”

The test aimed to verify the portability and ruggedness of Astrolight’s portable optical ground
station design. The terminal provided excellent performance despite being subject to rough handling
and mechanical stress during the trip to Teide Observatory and being operation in very windy
conditions.

“Our next milestone is to develop and install a larger optical ground station permanently situated in
southern Europe. It will re-use design elements from our portable system but with a larger telescope
and will be capable of achieving 10 Gbps downlink speeds from LEO satellites. We plan to install
the ground station by Q1 of next year,” says Laurynas Mačiulis.

The volume of data that needs to be transmitted from Earth to space and vice versa is growing
tremendously. The needed data throughput will only increase with the expansion of spaceflight
activities in all domains, including weather forecasting, broadcast, data relay, scientific and climate
data gathering and navigation services, as well as human missions.

The revolution that fibre internet has brought to terrestrial internet data capabilities is comparable to
what laser communication can bring to the ‘space internet’. Laser communication is by its nature
much more secure, has a much narrower beam width and is more difficult to intercept or jam. Laser
communication will enable next-gen security and the implementation of protocols working with
quantum principles, such as quantum key distribution for a secure key exchange.

“We are at the technology development stage where the support of ESA and its infrastructure is
crucial, and we are extremely satisfied with our cooperation,” says Laurynas Mačiulis.

This test is the first cooperation in the field of free space optical communications between the
European Space Agency and the Lithuanian-based company Astrolight. 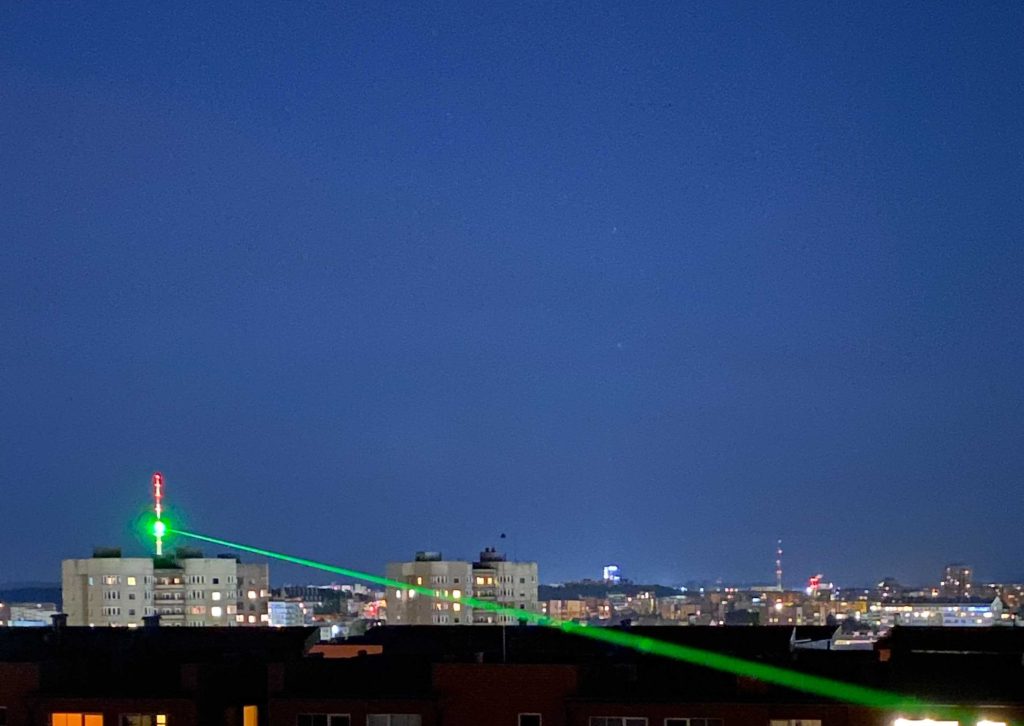 Astrolight, a start-up company specializing in free-space optical communication systems, has performed initial long-range ground test of its mobile optical ground station for LEO satellites, achieving Gigabit per second data rate over 10-kilometer distance. The test was performed by transmitting modulated optical signal at 1550 nm to the retroreflector located on Vilnius TV tower, which reflected the signal back to the receiver. Visible wavelength laser beacon was used for initial telescope alignment. The system was able to achieve better than 10 arcsec pointing accuracy to acquire and track the signal. Although communication distance was far less than a typical link distance to LEO satellite, the impact of atmospheric turbulence under test conditions was comparable or even more severe than in LEO-to-ground scenario, thus allowing to evaluate system performance under similar conditions with respect to atmospheric effects. Overall, results of conducted tests demonstrated that a ground station built from commercial off-the-shelf components can be used for free-space optical communication.

“This marks the first successful milestone in our effort to develop a scalable and cost-effective ground station for free space optical communication”, Astrolight co-founder and CEO, Vidmantas Tomkus says. The company plans to start tests with actual satellites by end of this year.

Most of Earth Observation satellites are still using X-band to download their images, but as the demand for data and number of satellites are constantly increasing, the limited radio-frequency spectrum becomes a bottleneck for further growth. Optical-frequency spectrum offers almost unlimited bandwidth and thus could greatly contribute to solving the data throughput problem of LEO satellites. The main challenge of optical communication for satellites are clouds – lasers simply cannot work their way through optically opaque materials. Thankfully, satellites can cover a vast area on Earth, so by increasing the number of ground stations globally, the overall access availability could be significantly increased, reaching similar level as that for radio-frequency communications.

“You really need a global network of distributed optical ground stations operating in low-cloud-cover regions to overcome this problem. We can no longer rely on existing astronomical observatories, but must build a new network, specifically designed for satellite communications with customer needs in mind. That is why Astrolight is following a commercial off-the-shelf approach to build its optical ground stations, so that in the end the cost of operating such a network could be competitive in the market“, Astrolight co-founder and COO, Laurynas Maciulis, says.

Astrolight was founded in 2019 with a vision to build a global optical communications network that will provide high throughput and enhanced security data link services for commercial and governmental satellite operators. The founding team has more than 10 years of experience in fields of photonics and satellite telecommunications. Astrolight is currently based in Science and Technology Park of Institute of Physics – the cluster with highest concentration of laser and photonics related technology companies in Vilnius, Lithuania. 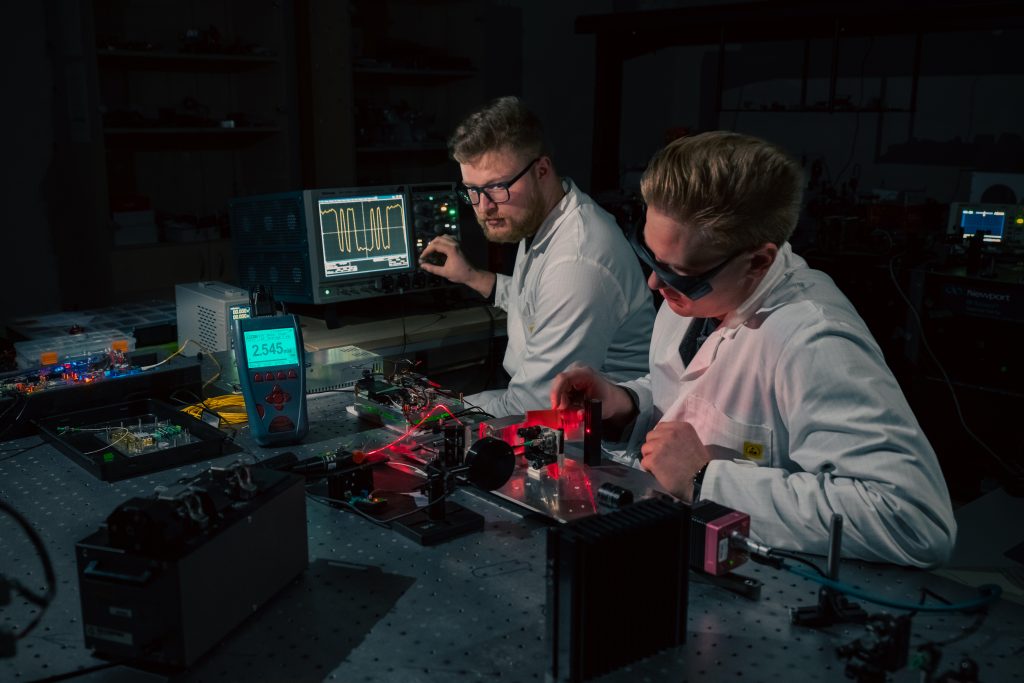 “One of the main reasons we decided to invest in Astrolight is that we trusted the company’s management and the entire team,” says Gytenis Galkis, a partner at 70 Ventures.

This company has great potential. The product it develops – the transmission of data by laser communication between objects on Earth or between objects in space – is relevant. We see that the field is evolving rapidly and these people have all the necessary competencies to create such a product.”

According to G. Galkis, the challenge to help Astrolight was accepted: “Our main task is to commercialize the product and find customers as soon as possible. We see the potential and the opportunity to expand globally.”

“The 70 Ventures VC fund, together with businessman Vladas Lašas, other LitBAN business angels and the European Space Agency, have invested more than half a million euros to complete and commercialize what we have started and to perform further technological research in the area in which we work.”

“The communication technology we are developing enables us to increase the data bandwidth in space up to millions of times,” says Laurynas Mačiulis, Founder and Chief Commercial Officer of Astrolight.

Data transferred from space to Earth is projected to increase 14-fold over the next decade to more than 500 billion gigabytes. The existing satellite radio spectrum will no longer be sufficient to transmit such data and will require a switch to optical spectrum, similar to the switch to fiber Internet on Earth.

Once the prototype is in place, we plan to develop a broadband network of terrestrial optical ground stations to transmit growing geoinformation data from space to Earth.

Asked if he sees progress among Lithuanian companies seeking to work actively in the space industry, G. Galkis replied that such progress is happening: “Vladas Lašas is one of the initiators driving the expansion of this industry and we can already see many exciting achievements.

About seven years ago, we only heard the name of one company working in this industry in Lithuania. And now more and more Lithuanian companies are appearing, they are noticeable all over the world. ”

Astrolight was founded in 2019 by researchers from the Center for Physical and Technological Sciences and VILNIUS TECH University. The company is currently developing free-space optical communication systems with higher data throughput and security compared to radio communications.

The company aims to engage in larger high-tech production chains for satellite telecommunications equipment, by providing laser communication systems for low Earth orbit and interplanetary communications in the near future.